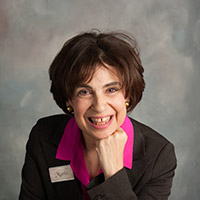 As the Former CEO of Imprint Plus for 18 years, Marla is proud of leading Imprint Plus through different growth stages ultimately leading to the acquisition of the company by CCLIndustries Inc., to become a division of Avery April 11, 2018. Marla was the 2013 winner of the WeConnect Canada WBE Ambassador award, the 2012 winner of the Bank of Montreal Global Growth Award, and a 2007 Ernst & Young Entrepreneur of the Year Finalist. Marla’s relationship with Imprint Plus began a $20,000 angel investment and a personal bank guarantee, needed to keep a 7 year-old start up afloat for a childhood friend.

When the bank called the loan in 2000, she gave up her Chartered Accounting practice, moved across the country to Vancouver, British Columbia, and became the full time CEO of Imprint Plus. Marla arrived to face an unproductive management team, thin capitalization and a balance sheet that sported a debt of $700,000. In the fifteen years that Marla Kott operated as the CEO of Imprint Plus, she has built the company into a thriving international exporter of name badge systems with a goal to becoming a category leader in this niche market, and recently through her team leadership sold the company for 25 million. Marla’s background as an accounting professional has been invaluable to her in her role at Imprint Plus, but she credits her business instinct to her Dad who was an entrepreneur himself and taught her a great deal. Marla is passionate about being a woman in business, and is very involved with WEConnect Canada, the Women’s Business Enterprise National Council, The B.C. Forum for Women Entrepreneurs, the Women’s President Organization, and more. She also enjoys mentoring young women in business (including her daughter) with her mantra, “aim higher”. Marla currently is an independent consultant and is on the GroYourBiz Executive Advisory Board.

“The gift of business knowledge to a woman entrepreneur is priceless” —Marla Kott, Former CEO, Imprint Plus

Are you Ready To Take Your Business To The Next Level?

Are you Ready To Take Your Business To The Next Level?

Remember it is NOT the time to “give up” but to STEP UP and continue to pivot and GroYourBiz!