Why is GroYourBiz women focused?

Why is GroYourBiz women focused?

Well this now ties into another reason why this blog is important for me to share at this time in my life.  I was surprised and honoured this past week to have been one of five recipients in Canada to receive the 2010 Governor General’s Awards in Commemoration of the Persons Case. These 31st annual awards recognize individuals who have helped to advance equality for women and girls in Canada. The awards commemorate the five Alberta women who in 1929 achieved the right for women to serve in the Senate. 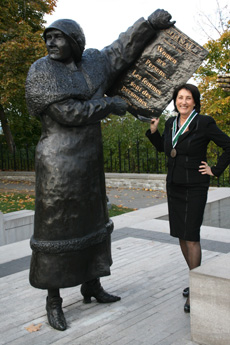 In 1929, five Canadian women – Emily Murphy, Henrietta Muir Edwards, Louise McKinney, Irene Parlby and Nellie McClung, who became known as the Famous Five – fought and won the right for women to be recognized as persons before the law, and thus eligible to sit in the Senate. In 1979, the Government of Canada established the Governor General’s Awards in Commemoration of the Persons Case to celebrate the 50th anniversary of the Persons Case decision and to recognize contributions to the advancement of women.

The day felt “surreal” and I wasn’t grounded until I had the opportunity to speak to high school students the next day, coordinated by the Ministry of Status of Women and the Enbridge Famous Five Foundation.

Feeling grounded also came from being surrounded by family and friends on this amazing day.

As a mother of a son and two daughters, and a grandmother of 4 amazing grandchildren (Madeleine, Maresha, Spencer and William), there was for me a sense of legacy being passed down as on the Mowat side there is a direct link to Nellie McClung, one of the famous five who fought for women’s rights before any of us were born.  My children’s great grandmother was Catherine Mowat, and her sister married Jack Mooney, who was Nellie’s brother.  Nellie and Catherine were the best of friends throughout their lives.  They would often get together after Sunday church and have great discussions. A quick story goes something like this: Catherine and Nellie were discussing how women would become financially independent, how they would make more money than men, and they would be in key government positions.  At this point Great Grandfather William Mowat got up and said in his mocking way: “Yeah, yeah, sure women are going to make more money than men.  Yeah , yeah, sure you’re going to rule the country”.   Well little did he know how far we would come, and yet how far we still have to go.  One step at a time.

How far do you think we have come?  What are the next steps we need to take for gender equality?  As women leaders what can we do more for the next generation of young women and men to make this a “better world” for all?