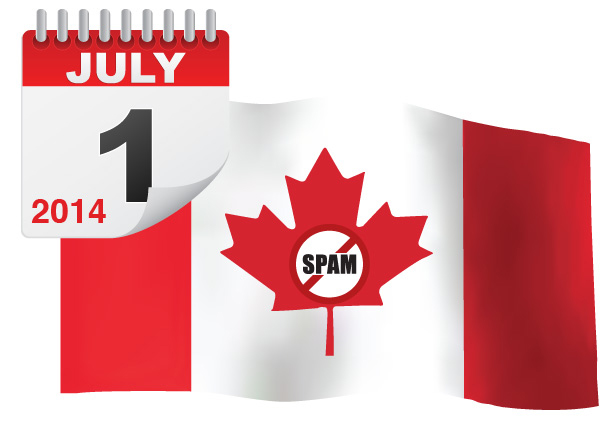 There’s been a lot of talk about the new Canadian anti-spam regulations that come into effect on July 1 of this year. The threat of a million dollar fine for individuals and 10 million dollars for corporations has many businesses scrambling to not only understand the new legislation but also comply with it.

I write a monthly technology column for a local newspaper (Sun Peaks Independent News), and this month covered a few details on how the new legislation works. I thought this would be a timely article to share with GroYourBiz members.

To understand how the Canadian Anti-Spam Legislation (CASL) will affect your business you’ll want to hone in on the word consent, as that’s what this new legislation is all about.

Unlike CAN-SPAM, the act regulating U.S. commercial email that gives recipients the option to unsubscribe, the CASL is based on an opt-in model of express or implied consent.

Express consent is commonly obtained when someone subscribes to a mailing list via a web form, after subscribing a confirmation link is required. What’s not considered express consent is when a subscribe box is automatically checked. CASL states that you don’t need to requalify existing express consent subscribers, their subscription period doesn’t have an expiry date and in order to be removed the recipient must unsubscribe.

The second type of consent is implied consent and if you’re already sending out email campaigns many of your subscribers will be likely fall into this category.

The rules and regulations for implied subscribers is varied, but in general it covers existing business relationships, whereby the sender and recipient have engaged in business together for the previous two years from the date the message is sent. CASL states that any subscribers falling under the implied umbrella need to be requalified.

If your database full of implied consent subscribers and you’ve emailed this list prior to July 1 that database may fall under the special transitional period, giving you three years to obtain express consent from your email subscribers.

There are exemptions to the CASL, some of which include personal or family relationships, direct enquiries, internal communications, business-to-business, messages sent in response to a request such as an email reply, legal obligations or enforcement notices and direct messages sent and received from social media platforms such as LinkedIn, Facebook or Twitter.

Other exemptions include charities and political parties, while exempt from the express and implied ruling they must still comply with unsubscribe requests. Your campaign must have an unsubscribe link and unsubscribes are required to be processed within 10 days. You cannot send a “are you sure you want to unsubscribe?” email. A physical mailing address and an email address or phone number must be added to the email and the email must primarily be about raising funds for the charity or political party.

One method to employ before July 1 is to email your existing database requesting a confirmation to continue receiving your emails. This can be done by using a blanket email to confirm their subscription or a by adding a call-to-action link within your current campaign.

The new legislation will give individuals and organizations the ability to sue those they allege have violated the law. However the true winners from this legislation will be the lawyers, as the legislation is so complicated that it’s going to be difficult to determine if an email is CASL compliant or not.

This law likely won’t decrease the amount of spam in your inbox, as most spam comes from outside of Canada, however it will stop Canadian companies from adding you to their email database and firing off unwanted emails.

For more information on the anti-spam legislation visit: http://fightspam.gc.ca/