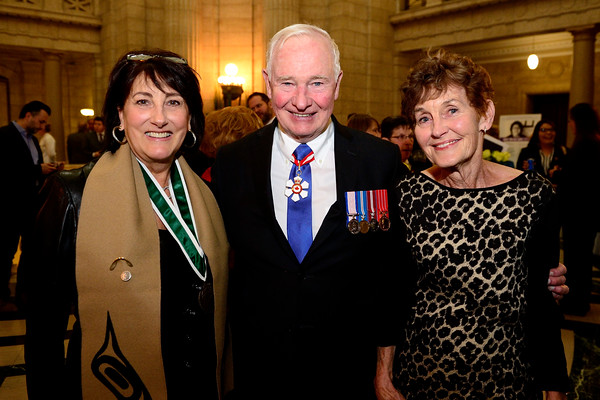 The Governor General Awards meant more to me this year than ever before.  For the first time the Awards were held at the Legislative Assembly in Winnipeg, Manitoba—a place that was vital to the struggle for women’s suffrage in Canada.  This year marked the 100th anniversary of granting the federal vote to women in Canada.  Nellie McClung, one of the Famous Five, who led the fight for women’s right to vote succeeded first in Manitoba.

My sister-in-law, Edie Mowat, was my guest as our children’s great grandmother, Catherine Wilkie Mowat was a friend of Nellie McClung and also a sister-in-law to Nellie. Both living in small communities in Manitoba, there would be many Sundays after church, where Nellie would sit at the kitchen table with Catherine and they would be discussing women’s rights and financial independence.   History is worth remembering.  I always say to Edie, “Catherine’s grandsons –Glenn and Barry Mowat married strong women—to carry on the passion for gender equality!”

My congratulations to the 2016 recipients awarded with the Persons Case this year who were: Cecilia Benoit, Anna-Louise Crago, Pascale Navarro, Norma Jean Profitt, Diane Redsky, and Lucia Lorenzi for the Youth Award.  My congratulations to all in joining “the Club” of CDNs who advance gender equality.