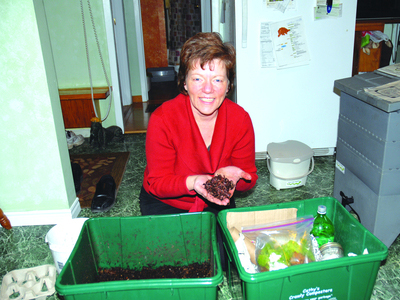 I’m a big fan of worm composting. I got into it after attending a worm composting session put on by the regional district. The districts aim — to reduce the amount of organic matter placed in local landfills.

Worm composting or vermicomposting as it’s commonly called is a process of converting food scraps and paper into nature’s finest fertilizer known as castings.

Toronto based entrepreneur Cathy Nesbitt is also passionate about vermicomposting. She has a vision — to merge her two passions, people and the environment.

Doing her part for the environment by composting at home it was only a matter of time before Nesbitt would one day question what her workplace was doing with their waste, which lead to the discovery that they were missing out on the benefits of composting. It was then that Cathy’s Crawly Composters was born.

Nesbitt is a board member of the Toronto GroYourBiz.com MyBusinessMyBoard™ Advisory Board, she holds a Bachelor of Psychology from York University and is the founder of Cathy’s Crawly Composters. Nesbitt says the opportunities that are available through a peer-to-peer advisory board are one of many reasons to get involved.

“The educational component (of GroYourBiz) offers targeted learning for me to work smarter in my business. Having my own board to brainstorm with whenever a challenging situation appears has been very beneficial,” said Nesbitt.

It’s been just over 12 years since the inception of Cathy’s Crawly Composters and during that time the company has been acknowledged with over 15 environmental and business awards for their work on increasing awareness about the benefits of vermicomposting.

As a big supporter of the current trend towards sustainable living I think vermicomposting is a practice that fits in with this trend. Although Nesbitt doesn’t view worm composting as a trend, she does believe it’s a step towards helping solve the global garbage crisis.

Vermicomposting, is an excellent way to convert household garbage into nutrient rich fertilizer, making it a clean and environmentally friendly way to save tonnes of waste from going to landfill.

For more information about vermicomposting visit cathyscomposters.com. You can also view Cathy’s Wonderful World of Worms TEDxTAW discussion below.